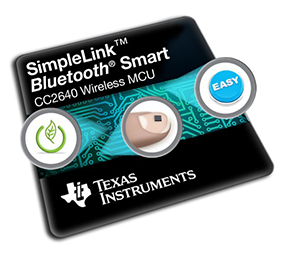 TI has released a new family of Bluetooth and Wireless SoCs with the designation CC26xx and CC13xx which include the CC2640, CC2650, etc. These SoCs are MCU + Radio combo devices, similar to the CC2540 and CC2541 which are 8051 + BLE. The CC26xx focuses on 2.4GHz applications, while the CC13xx is intended for Sub-1GHz applications. The two families are highly compatible and include a Cortex-M3 ARM running at 48MHz dedicated to the application code.

As you probably know, most BLE SoC devices out there are Cortex-M0 devices, where the same CPU runs both the Application and the Bluetooth Stack. This can sometimes limit the algorithms and code that can run because a Cortex-M0 is not a high performance core limited in capabilities. Also, the CPU time and resources are usually shared between the application and the BLE Stack. In the case of the CC26xx and CC13xx, there is a separate Cortex-M0 running the lower layers of the BLE stack including the physical and most of the link layer. The Cortex-M3 runs the application, the upper layers of the Bluetooth stack and some of the link layer.

A Cortex-M3 CPU is more powerful and can better run the complex algorithms used by products like fitness monitors, industrial controls and home automation products. So you may be able to avoid using an external processor completely.

There’s also good news on the energy consumption front, which is critical in most BLE products. If you’re familiar with the CC2540/CC2541, you know that the power consumption was too high with 17mA to 18mA compared to around 10mA or lower for other devices. The CC2640 and other CC26xx turn this around. Texas Instruments states they consume 5.9mA in RX and 6.1mA in TX at 0dBm. With these numbers, your product could stay running for several years from a small Coin Cell battery.

The CC26xx also has very nice mix of peripherals, and a sensor controller that is designed for offloading the CPU and lowering power consumption even more (needed because the Cortex-M3 at high speeds will consume more power).

A few of the specs of the new devices include:

The CC26xx family lowers the power consumption bar for BLE chipsets, and it is one of the strongest points of the device:

The only device that is close is Dialog Semiconductor’s DA14580, which is runs at about 5mA. But, the DA14580 has no internal flash and doesn’t have the Cortex-M3 (as well as many other features).

You should realize that with the 61uA/MHz power consumption at 48MHz, your total power consumption may be higher than a slower device running at 16MHz. But you should also consider that running faster also means you could go to sleep quicker. Make sure when you’re designing your product to take everything into account.

Another important innovation in the SimpleLink family is that they have a separate Cortex-M3 processor that can run up to 48MHz. The low speed compared to external Cortex-M3 indicates TI has clearly optimized it for low power (which usually limits the speed at which a processor can run).

Having a CPU that’s dedicated to the application makes development easier and processing faster. CPU cycles won’t be “stolen” by the BLE stack to handle packets.

The processor does take more space on the silicon die, but depending on the process TI used this may not affect cost significantly.

Information on the Bluetooth v4.1 Stack is still fresh. But, we’d expect that the BLE stack will benefit from TI’s long presence in the BLE SoC market and the thousands of products using CC2540 and CC2541.

Another interesting question we’re looking into is whether the this device will support Bluetooth v4.2 anytime soon. The next generation of Bluetooth adds privacy, security improvements, and IPv6 support, all of which are critical if Bluetooth wants to be come a standard for the Internet of Things.

The CC26xx claims a receiver sensitivity of -97dBm which is excellent and perhaps the best in the market. Other devices in the market specify -92dBm or so. The extra 5dB of the CC26xx means better reception and range without having to increase the output power.

Getting the -97dBm requires good RF design and layout. Noise in the circuit needs to be reduced and isolated.

The Output power is also +5dB which is a nice 5dB to 1dB above most other solutions out there. The CC26xx is also compatible with TI’s CC2590 and CC2592 range extender ICs, so if you need more range you can design it seamlessly.

From an RF design perspective, TI has three different recommendations for the output circuit, starting with a low cost, single-ended design to a higher performance differential design. It even supports dual antennas. It’s always nice to see options since in some products you may want to shave cost as much as possible.

Most if not all BLE SoCs are simply a GFSK radio with the BLE stack on top. The majority of the work is in the BLE stack and it’s easy to re-purpose the radio for other protocols.

Many BLE radios out there like the nRF51822 can run proprietary protocols like Gazelle and ANT. The CC26xx takes this one step further. Because of the dedicated Cortex-M0 wireless processor, the CC26xx can better more complex protocol stacks. TI is offering several variants including the CC2650, CC2640, CC2630, and CC2620 which can run Zigbee, 6LoWPAN, RF4CE and other custom protocols.

There are a few cases where supporting multiple protocols at run-time can be useful. Few will use the radio like this, but it is nice to be able to use one radio chip for all your 2.4GHz needs, in a platform that can grow to accommodate new protocols. The Bluetooth Specification is changing, and it’s always good to go to the new spec with just firmware updates if possible.

The CC13xx are almost identical devices but with Sub-1GHz capability. This part hasn’t been released yet but it should also have very low power consumption and many of the same specifications as the CC26xx.

Some developers had an issue developing for the CC2540/CC2541 because you had to use IAR for 8051. For the CC26xx TI is supporting both IAR Embedded Workbench for ARM, as well as TI’s Code Composer Studio. Since CCS is much lower cost and has a long evaluation period, it should open up the device for even the smallest developers, while letting companies already invested in the ARM ecosystem to start developing without needing to purchase a new compiler.

TI’s SmartRF Programmer and SmartRF Studio, as well as other utilities are being upgraded to support the CC26xx, so if you’re a CC2540 or CC2541 veteran you can continue using these tools which help simplify development of BLE products.

One of the most exciting additions to the SoC is a dedicated sensor controller. If you’ve developed Bluetooth Smart Products you’ve no doubt interfaced to external sensors. These sensors usually use SPI and I2C to send sensor data. Usually, the CPU needs to wake up and receive the data which is very inefficient

The Sensor controller is actually a separate CPU. Although TI doesn’t state what it is, it may be a variant of the MSP430 which excels at low power. Indeed some of the characteristics of the sensor controller resemble MSP430 devices (such as 200ksps ADC).

The number of vendors providing Bluetooth Smart chipsets keeps growing, but the SimpleLink family from TI for 2.4GHz and Sub-1GHz is sure to give many of them a run for the money with its very low power, dedicated processor, and excellent RF performance.

There are still a few aspects of the solution we want to look into including the stack and functionality supported, but we can expect that with time it will mature and become very popular in many products.

What do you think? Is there any feature in the CC26xx and CC13xx  you think will help you create a better product?