A Developer’s look at the BOx Bottle Opener

At Argenox we love building wireless devices, so it’s not unusual to find our engineers on Kickstarter looking at what people are building. A little while ago we found BOx, a bottle opener with Wi-Fi that’s being built by a team from Switzerland. It’s an interesting concept that lets you share opening bottles with your friends over social media. Beer pong is so 90’s it seems.

Thankfully, the campaign has a few good pictures that let us peek at what’s being designed, and with about 16 days left we thought we’d share our insight.

From the images we can clearly see the Wi-Fi chip and the main circuit. From first appearance it’s a fully integrated Wi-Fi chipset. A large inductor for DC/DC voltage regulation and a PCB Trace antenna as well as a few passives are also visible. The logo on the chip is that of Espressif, a relative newcomer to the Wi-Fi / BLE game but very popular among hobbyists because of the simplicity in design. Espressif has made their name in very integrated devices and making Wi-Fi almost as easy as BLE, with some tradeoffs in performance.

We think the chipset here is either the ESP8266 or more likely the ESP8285 since the ESP8285 integrates some flash memory, saving space. We couldn’t confirm a flash chip in the images or video. 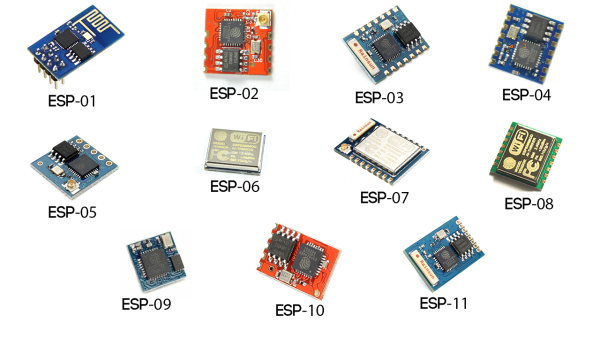 The ESP8285 is a pretty complete device that contains everything you need to build a Wi-Fi connected system. Externally there are very few components needed, but one of them is the antenna.

You’ll see clearly a PCB trace antenna in the design. Trace antennas are the least expensive option as far as 2.4GHz antenna go, and they do sacrifice performance and efficiency, but they’re small and cheap. Designing them properly is part art, part science. You can see in the picture that the metal that forms the actual bottle opener is completely surrounding the Wi-Fi device and the antenna. This won’t block the signal on the wooden sides, but it will cause some issues in those specific positions (and other things, as you’ll see).

More importantly, PCB trace antennas like the meandering antenna used by BOx can have relatively narrow bandwidth. This leaves a lot less room for error in the design. Every PCB antenna has to be tuned, and the equipment to do this right is around $60k to $100k, not to mention the RF expertise. What happens if the antenna isn’t tuned? It’s almost sure to be inefficient at transmitting and receiving by a few hundred MHz (usually), so the range will decrease significantly. Have you heard of BLE products that only have a few meters of range? That’s one of the reasons. We’ve tuned many antennas and the improvement in range and performance can be amazing.

Why tune the antenna? Every time you introduce elements in the field of the antenna, especially when you’re just a few millimeters close, you affect its resonant frequency. Ideally it should resonate near the center of the 2.45GHz band, but as soon as you put plastic or other materials, it starts shifting down. The signal is converted into heat at the antenna.

Another interesting (and somewhat worrying) aspect is what appears to be lack of ground on the top plane. We can tell by looking at the color of the PCB whether copper is present, and except near the antenna side, it’s mostly absent.  Although it’s possible that the internal layers of the PCB have copper, it’s typical to place it on top as well. The PCB trace antenna depends on this ground plane to work right since it actually forms part of the antenna. The worse the ground plane, the worse the antenna will perform and the more “finicky” it can become. It also makes measurements to tune the antenna more difficult.

Originally we didn’t find any images of the backside of the system PCB, but we thought it had a few things:

Finally we found the video from BOx that showed the back side. On the image you can see a long trace which is probably connected to the battery contact that’s further away. That tall black device seems to be a shielded inductor. Some of this is confirmed by the width of the traces and the design (meant to dissipate heat) and the fact that the battery trace reaches the inductor, typical of DC/DC Boost converters. 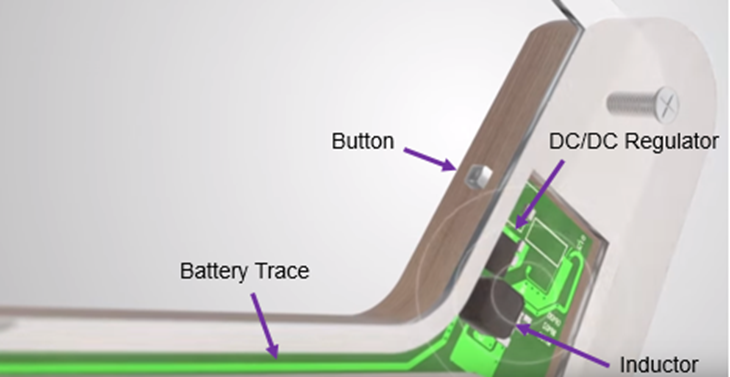 We can also see what’s clearly a button meant to detect the bottle cap. This is critical in the operation of the system. Wi-Fi chipsets typically draw quite a bit of current and would easily kill a battery in a few hours. Espressif specified 80mA as the average current for the ESP8285. But, given that the voltage has to be boosted from a minimum of 0.9V to 3.3V, the system would draw around 293mA at this stage plus around 10-20% from inefficiency of the booster.

At over 300mA, it’s critical to turn off the Wi-Fi and go to sleep as much as possible, and the button helps BOx determine when that will happen. AAA Alkaline batteries capacity varies from manufacturer and quality, but it’s around 1200mAh. This means BOx would last around 4h at full blast with Wi-Fi running constantly, only good for very short parties or when folks are partying on the cheap. Thankfully BOx does go to sleep and that number will go down.

The ESP8285 Wi-Fi chipset supports a few power down modes. We believe that BOx would use a combination of Light-Sleep and Deep-Sleep modes. In Light sleep it can still maintain a connection to the access point and around 3-4mA are needed. This will typically be when the system is still somewhat active between bottle openings. BOx can run for around 300 hours in this mode.

But BOx doesn’t have to maintain a constant connection when not in use (in a drawer or when not in use). This is where the switch comes in. BOx is probably going to enter Deep-Sleep which draws an average of 10uA. Taking into account the rest of the circuit, we’d expect around 20uA in Deep-Sleep which with the booster means around 73uA. This means over 16000 hours of standby or around two years.

Remember that the system in real-life will use both Deep-Sleep and Active mode, so BOx’s claim of lasting a year is reasonable unless it’s being used by the crew of The Hangover. New Years, Christmas and a few other holidays should be covered too.

Like with every hardware startup or project on Kickstarted and crowd funding, delivering the product on time can be tough as you try to get everything in line from design to manufacturing.

The designers of BOx chose a discrete implementation by putting the devices directly on the PCB. It’s pretty much the only option available to them because Espressif’s modules are probably too big to fit physically. But using a completely custom PCB layout and RF design means the developers of BOx have to go through full FCC/IC/ETSI certification to ensure that Americans, Canadians and Europeans can enjoy their drinks. This takes time and costs quite a bit. If they were looking to use the Wi-Fi trademark. Then it needs to pass the Wi-Fi Alliance certification, which can be quite expensive.

What about costs for manufacturing. We don’t have the full Bill of Materials for BOx, but here’s our estimate assuming moderate volume (10k units):

This doesn’t include the wood and metal parts, packaging, assembly and testing. Batteries vary more than you would think in quality. Very cheap ones will have a much smaller capacity and will die quickly.

The electronics themselves are likely around $6, so it’s clear that with an average price of $22 USD, there is some margin, but not much. The certifications themselves for the product can be $30k or more, which is more than the current $17k currently committed from backers, never mind testing and design which are more than that. BOx isn’t relying on Kickstarter to fund the whole effort.

So what recommendations would we have for the BOx developers to make sure they can deliver? Let’s start with a few: