Plenty of vendors have announced new Bluetooth Low Energy devices. Nordic has just announced the new nRF52 series of devices, which take the popular nRF51 series to a new level. There’s a lot of excitement for these parts because they bring in better performance, lower power and more functionality.

The nRF52832 is just sampling and has not yet been released to production, so it’s not possible to use it in a design. But before the end of the year we’re likely to see production parts and a complete SDK.

Nordic’s popular nRF51822 and nRF51422 are complete BLE SoC devices that use Cortex-M0 core running at 16MHz.  On the other hand, the newer nRF52832 integrates a Cortex-M4F core with large Flash and RAM, more peripherals, as well as improved RF performance.

Here’s a summary of the specs comparing the new part to the nRF51822 and nRF52832, as well as parts from other vendors:

Let’s take a look at these parameters and see what’s new and different:

Every new generation of BLE SoCs lowers the power consumption. The nRF52, and the nRF52832 in particular, almost halves the nRF51822 current:

These numbers make the nRF52832 very competitive with the CC26xx family from TI and is better than many other devices.

Actual power consumption will depend on a lot of factors, including CPU speed, BLE parameters (connection or advertising interval) 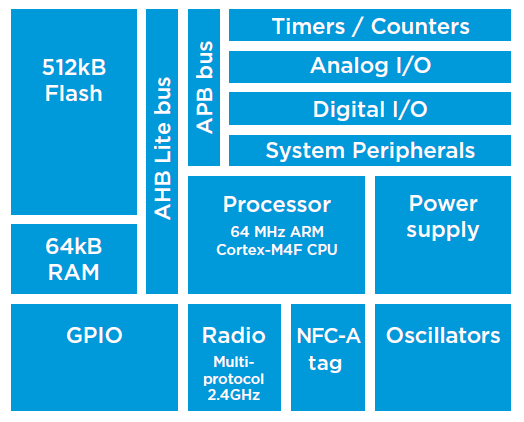 The nRF52832 continues the improvements we’ve seen in many BLE chipsets of introducing more and more capabilities to the SoCs. In this case Nordic has added a Cortex-M4F processor, which is higher performance and includes floating point capabilities. There are many applications like wearables and industrial systems that are using more and complex algorithms and need faster . processing. The Cortex-M4F also has a maximum frequency of 64MHz, much higher than other devices.

The SoC includes 512kB of Flash and 64kB of RAM which sets it apart from other devices out there. Nordic states that 400kB of Flash is available for the application itself. If you’ve built any BLE products you know that the stack can take 80kB or more. In BLE parts with only 128kB of space, this means the application is left with a little less than 40kB. This is enough for small sensor applications, but not much else. Nordic was one of the few vendors already providing 256kB parts with the nRF51 family, so it’s nice to see that vendors are putting more flash and opening up the options.

Since Nordic hasn’t switched processor architectures significantly – the Cortex-M4F is an extension of the Cortex-M0 – the stack should remain mostly the same. This means developers can leverage a mature stack with Central and Peripheral modes that has a lot of examples.

There’s no word on Bluetooth v4.2 support, but we’d be surprised if the hardware isn’t already in place and the software is in the works. You can find more about Bluetooth v4.2 in this article, but v4.2 brings faster speed, more security and lower power to BLE. 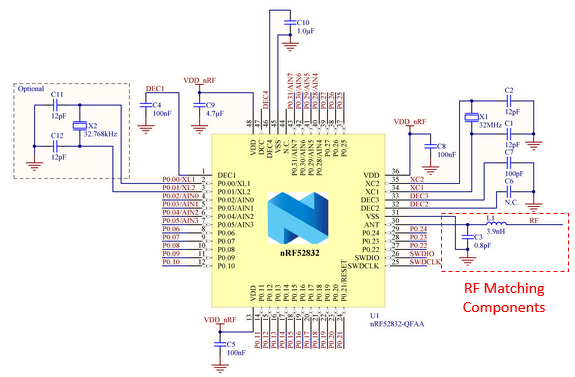 We wouldn’t be able to talk about the latest devices without discussing the RF side. After all, the BLE packets have to get through.

The new family improves the sensitivity of the receiver to -96dBm, which is close to TI’s -97dBm for the CC26xx. The extra few dB of sensitivity help improve the range of the device.

Another improvement to the devices is the integrated Balun. In nRF51822 design, you would need to add external passive components or a small Balun device that helps match the output of the SoC to 50 Ohm. Now the Balun is integrated, saving on space and cost. This follows many vendors such as Dialog and TI that have been integrating their SoCs with everything they can.

An external inductor and capacitor are used to give some tuning capability because of differences in layout and antenna, but gone are the 5-6 external parts or the external Balun.

Most vendors are moving towards SoCs that can support multiple protocols like BLE, ANT, Zigbee, etc. There is still no clear winner in the IoT war to determine what protocol will win, since each protocol has advantages. And it is likely we will see multiple protocols for different applications. Multi-protocol SoCs help solve the issue. Because the radio is the same and only the stack changes, it’s possible to run many of these protocols with just a stack, and in some cases to run them concurrently.

nRF52832 supports Bluetooth Smart (Low Energy), ANT/ANT+ and proprietary 2.4GHz  protocols. It maintains compatibility with a lot of Nordic’s parts including the nRF51, nRF24AP and nRF24L. Unfortunately there is no support or Zigbee or Thread which could be a problem long term. Nest/Google are pushing Thread heavily and it is slowly becoming a competitor to BLE in Home Automation applications.

Nordic did include NFC support in the nRF52832 in the form of NFC-A, which means it can act as a tag and communicate with smartphones. There are some applications where the short range and security of NFC is desirable, and integrating it in a single chip is beneficial from a cost perspective, but we’re unsure of how much benefit this can bring to the general market where BLE v4.2 will dominate and bring security and range.

Answering whether the nRF52832 is right for your product is a complex question that depends on the product requirements. There are many things that are really great about the part:

There are a few things to note:

Flash memory uses significant space on the die and these part may cost more than smaller flash parts. We don’t have pricing information yet, but Nordic may release 256kB variants that are lower cost.

The nRF52832 still uses the same processor for both the stack and the application, so when a SoftDevice is used for BLE, some peripherals are not available.

The part definitively fits the wearable market given the power processor and high integration, but there will be always some applications where all the features are not needed, and the nRF51822 / nRF51422 or other parts may be a better fit.

Since the part is not yet in mass production, it may be too long for some projects.

A lot of exciting parts have been released, and Nordic’s latest nRF52832 brings a lot of powerful features and lower power with Nordic’s proven stack and solution.